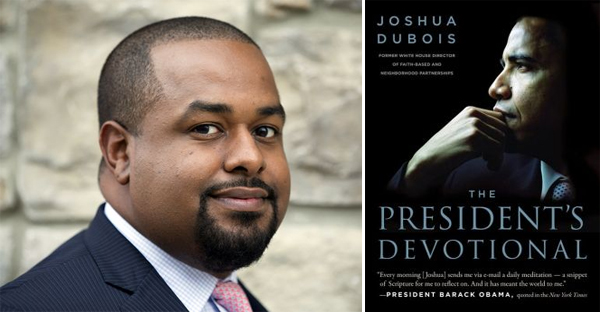 Happy #ThankYouThursday. Welcome back to our weekly tradition of committing to share five gestures of gratitude to folks in our community letting them know how much they are loved and appreciated. Whether by an old-fashioned hand-written note, a call, a text, or smoke signal, we invite you to take a pause right now and join the tradition by letting five people in your network know right now how thankful you are for them.

This week we’re sending love and appreciation to Joshua DuBois. Many of you may know Joshua as a social entrepreneur, author, media commentator, and CEO of social impact firms Values Partnerships and Gauge. He also previously served as President Obama’s Director of the White House Office of Faith-based and Neighborhood Partnerships during his first term. Yet, when I think of Joshua I first think of him as a loving husband, father and friend who consistently goes the extra mile to build community and encourage others.

One of my leadership mantras over the years has been, Be humble as a lamb, yet bold as a lion. I cannot think of a individual in my network who personifies this mantra more than Joshua. He has contributed so much over the years I’ve known him, elevating and celebrating Black men in their roles as fathers, mentors, and community leaders. His 2013 Newsweek cover story, “The Fight for Black Men,” shone a national spotlight on the Black Male Achievement movement.

The day after President Obama’s July 2013 speech responding to George Zimmerman’s acquittal for the murder of Trayvon Martin, I got a call from Joshua inviting me and my colleague Rashid Shabazz to the White House. There we would begin a conversation that sowed the seeds of the My Brother’s Keeper Initiative which eventually evolved into MBK Alliance.

I’m grateful to Joshua for the partnership opportunities over the years that are too plentiful to list here, including community activations around the premieres of the films Selma, Fences and If Beale Street Could Talk. Finally, I thank him for writing The President’s Devotional with daily mission fuel messages for an entire year, including today’s July 29th message, which concludes with the following prayer:

Lord, I know how far you’ve brought me, and I remember what it was like to be outside of your presence, on the other side of the river. I don’t want to go back, and I’m committed to going forward. Amen.

PRE-ORDER YOUR COPY OF “I TOO AM AMERICA” HERE!