On Birthing Your Own “Untold Story” 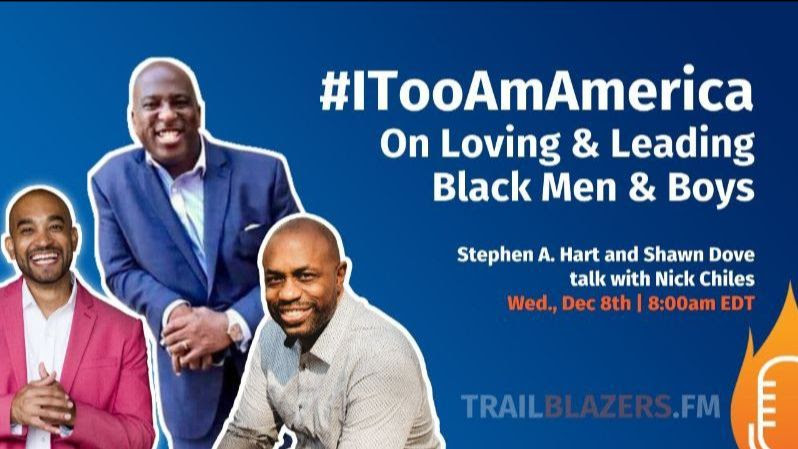 In the introduction of my and Nick Chiles’ forthcoming book, I Too Am America: On Loving and Leading Black Men & Boys, we begin with the following poem I wrote in 1988 which was first featured in a publication called Word, A Poetry in Motion Off-Creations Publication: Later on, the book’s afterword leads off with a Maya Angelou quote that declares, “there is no greater agony than bearing an untold story inside of you.”

Between each of these sections, I attempt to help settle the unrest that often comes with birthing an untold story – not just my own or those of young Jamare Winston and Romero Wesson as featured in the book, but also the stories of so many others who are still on their journey of self-reflection and self-realization.

Some of you have already begun reaching out to share how reading I Too has helped you be the “midwives” of your own stories and narratives. With this in mind, I want to send resounding #ThankYouThursday love and appreciation to everyone who has pre-ordered the book. Thank you for you belief, thank you for your purchase and most of all thank you for your patience as we worked hard to make this book an offering of love, truth and, hopefully, inspiration.

For those who’ve yet to receive their copy, pre-orders purchased directly from our website are shipping, beginning with the hardcovers (paperback versions soon to follow). The hardcover is also now available to pre-order on Amazon. It is my prayer that when your copy of #ITooAmAmerica lands in your hands and hearts – that you’ll consider it worth the wait.

PRE-ORDER YOUR COPY NOW ON AMAZON!

News from the BMA Field

Congratulations David C. Banks on Being Appointed the Next Chancellor of NYC Public Schools! Earlier today New York City Mayor-Elect Eric Adams made the marvelous announcement that our long-time friend, collaborator and co-creator David C. Banks will serve as the next Chancellor of NYC Public Schools. The Corporation for Black Male Achievement is so very excited for and proud of David, who has exhibited exemplary courage, character and commitment on behalf of New York City’s children throughout his esteemed career.

As Founder of the Eagle Academy for Young Men and a leading voice in the Black Male Achievement field, just last week David served as the closing speaker during the virtual Rumble Young Man, Rumble! 11 gathering, which leverages the six core life principles of Muhammad Ali as a catalyst for intergenerational movement-building on behalf of Black men and boys. Having proclaimed myself one of Muhammad Ali’s biggest fans ever, I am confident that in his new role as NYC Schools Chancellor, David will personify one of the Champs favorite quotes: “He who is not courageous enough to take risks will accomplish nothing in life.”

Please join us in congratulating David and wishing him much success!

This week we’re excited to treat you to a special “Trailblazers” Podcast double feature, starting with the most recent episode featuring I Too Am America co-author and acclaimed journalist Nick Chiles. Nick joined Stephen A. Hart and me on our weekly #WillionaireWednesday livestream to talk about our partnership in producing #ITooAmAmerica and the vision for his 20th book.

Prior to that, we sat down with two of my greatest friends and leading Black Male Achievement voices, Coalition of Schools Educating Boys of Color (COSEBOC) Executive Director Ron Walker, and Cities United Executive Director Anthony Smith for a reflective and powerful discussion on “Grief, Grace and Gratitude.” Tune into both below!

As a final #ThankYouThursday shoutout, we’re grateful for all of the hearts and hands that went into planning this year’s virtual Rumble Young Man, Rumble 11 gathering. After being completely online last year, it was a wonderful feeling to personally be back onsite at the Muhammad Ali Center in Louisville, Kentucky, where I was joined virtually by a number of familiar faces. Check out a few highlights below!